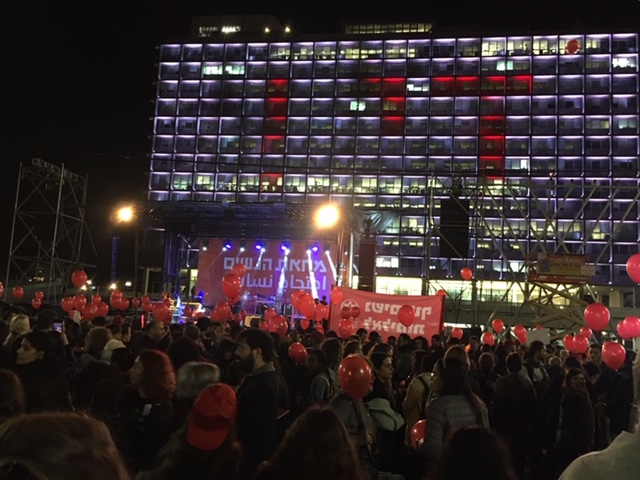 Last week tens of thousands of women and men in Israel took to the streets to bring attention to the growing number of women that have died because of domestic violence in Israel.  I was able to attend the event in Rabin Square in Tel Aviv and had an opportunity to talk to two of the organizers and get a first hand look at the people organizing to make positive change and bring much needed focus on an issue that impacts so many women in the Middle East and around the world.

Standing in the middle of the demonstration, what was obvious was that this was about all women from all backgrounds, not just Jewish women or Arab women, Palestinian or Israeli.  Leaders and the people demonstrating put differences aside, including religious and political differences, and used their collective voice. There were speeches made in Arabic, Hebrew and English.  People in the crowd were old and young, black and white, Jewish, Muslim, Christian, Secular. It was also inspiring to see how many men attended to show their support and be part of making change. 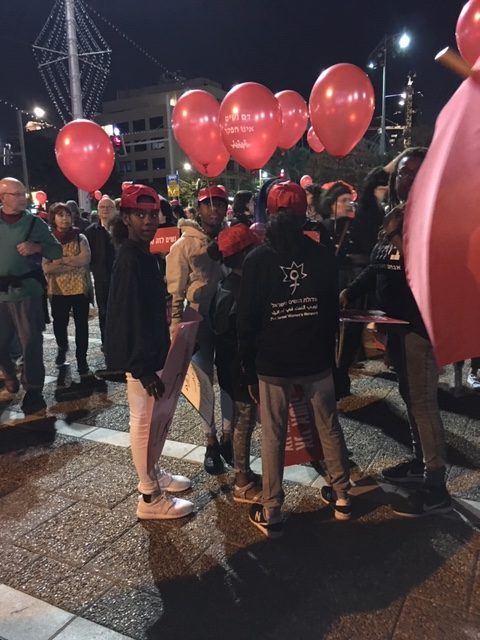 The strike and demonstration was organized after the murders of two girls – Silvana Tsegai, 12, and Yara Ayoub, 16. These were the 23rd and 24th murders of women and girls in Israel this year, marking a sharp rise compared to last year.

The message at the Demonstration:  Women of the World Unite.

GW4W had an opportunity to do two videos with two of the organizers:  one an older women in charge of domestic violence shelters and a younger Millennial leader that has grown her group to over 40,000.  Both were there to join with other like-minded people looking to do more good together. We are posting the videos on our GW4W YouTube channel.  These are women leading and using their voice for good. They are using their voice for those that cannot. It was an honor to meet them and learn about the important work they are doing.

Domestic violence has a direct impact to the health, wellbeing and ability to lead for women everywhere.

This is not just an issue that touches low-income women.   And yes, this issue can and does also happen to men too.

Domestic violence is a global issue that impacts women’s health, wellbeing and ability to lead personally and professionally.  We need to build a global voice to make needed changes.  But we also need to understand the underlying issues that have made it difficult to make change happen.  We need to do this for the next generation.

What can you do?

Domestic abuse and violence disproportionately impacts women everywhere.  It encompasses not having access to income, being told you are “less than”,  and even honor killings.   At Global Women 4 Wellbeing (GW4W), we know that this issue has a direct impact on women being able to lead well personally and professionally.  Positive change can and must happen. We can do this by joining our voices together and taking action.

For all the people actively stepping up and using their voice for change, thank you!