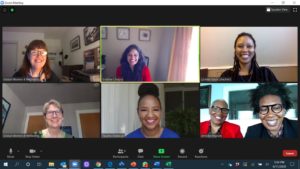 Mothers who have lost their children to violence have for too long gone unnoticed and remain invisible in our society. No one wants to imagine what it’s like to lose a child to violence. Yet, devastated and grief-stricken mothers who have experienced the unimaginable are on the rise. Through shared support, it is possible to help other mothers heal and hold space in which to honor their child’s memory.

GW4W will be working with Crystal Turner, founder of the non-profit organization, A Hand Up To Success and their Mothers in Healing initiative for an inspiring, engaging and transparent online event to be a voice for positive change.

Join us on January 28th for the Live Stream premier of the documentary, “New Normal” highlighting real stories of mothers who have lost children to gun violence. This new normal is what mothers and leaders must face as they learn how to live life again after these tragedies. 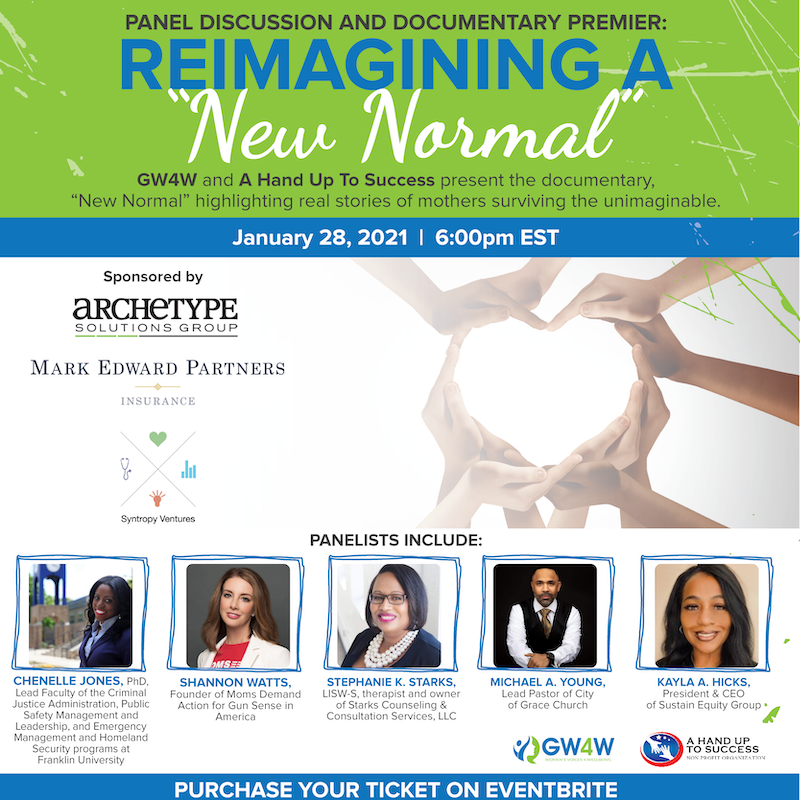 It will be followed by a panel discussion comprised of leaders who are addressing this issue in an impactful and actionable way.

Chenelle Jones, Ph.D., is the Assistant Dean of Community Engagement, and Chair of the Public Safety Programs at Franklin University. She received her Ph.D. in the Administration of Justice from Texas Southern University in Houston, Texas Dr. Jones is a highly sought-after speaker and is a reviewer for the U.S. Department of Justice Office of Justice Programs, the National Institute of Justice (NIJ), and several academic journals including the Journal of Juvenile Justice, the Journal of Offender Rehabilitation, and Race and Justice. She is a crime analyst for TV One’s hit show “For My Man.” She was appointed by Columbus Mayor Andrew Ginther to serve on the Columbus Community Safety Advisory Commission. Dr. Jones currently serves as the National Director of Research for the Teen and Police Service (TAPS) Academy, a federally funded program designed to reduce the social distance between police officers and youth.

Shannon Watts is the founder of Moms Demand Action for Gun Sense in America. For nearly eight years, Moms Demand Action volunteers have stopped the NRA’s priority legislation in statehouses more than 90 percent of the time. In addition to her work with Moms Demand Action, Watts is an active board member of Emerge America, one of the nation’s leading organizations for recruiting and training women to run for office. Her book, Fight Like a Mother: How a Grassroots Movement Took on the Gun Lobby and Why Women Will Change the World, was released in May of 2019 and is now available in paperback. In 2018, Watts was named as one of PEOPLE’s 25 Women Changing the World, and InStyle named her as one in its 2018 “Badass Woman” series.

Stephanie K. Starks, LISW-S, is an independently licensed therapist and owner of Starks Counseling and Consultation Services, LLC. She has worked in the social work field for more than 18 years. Her area of specialty is trauma. Ms. Starks works with children, teens, families, adults, and couples. She also works with those who struggle with depression, anxiety, and mood disorders as well. She facilitates a grief support group once a month for parents whose children have died due to gun violence. Ms. Starks is a proud graduate of The Ohio State University, where she earned her Masters in Social Work. She is a member of the National Association of Social Workers. Ms. Starks is the National Programs Chair and a member of Sigma Gamma Rho Sorority, Inc., Iota Nu Sigma Alumnae Chapter.

Pastor Michael A. Young is a charismatic leader, visionary, community activist, and entrepreneur who serves as the Lead Pastor of City of Grace Church in Columbus, OH.  Truly he is a lover of Jesus and a lover of people.  Michael’s mission in life is to help others discover their God-given purpose by leading them to an authentic encounter with Jesus Christ. His ministry has been featured on the Trinity Broadcast Network, The Word Network, and various other media outlets.

Kayla A. Hicks is the founder of Sustain Equity Group, a first-of-its-kind national 501(c)(3) organization led by Black women, Kayla is committed to facilitating powerful and lasting transformation among Black women and within marginalized communities where violence and trauma are prevalent.

Thank you to our Sponsors: